Tire the skye til collapse...
Seas will rise...
And fill everything up with water...
Drown...
Drift ashore...
Drift nowhere...
Will not be swimming the skye of salt...
Yet can at least dream of it...
Publicado por Joel R en 16:34:00 No hay comentarios:

Then...
There has not been enough of that glowy smell of her skin every given morning I wake up next to her.
Those seconds or minutes or perhaps hours I wait for her awaking thus sharing a smile are firmly rooted in how exceptional it is to be next during a night of sleep.
Publicado por Joel R en 16:01:00 No hay comentarios:

So...
Scent kept in my nose, in my clothes & in hers, in the pillows & bed, in the thoughts & the strains.
The source will rearrange & come into my arms, so her sleep goes afar & loses itself, lit by the grinning moon my heart can turn into when she naps by my side.
Today's will not be a lonely night since she strolls in my heart, thus my waiting sits quietly.
Publicado por Joel R en 15:53:00 No hay comentarios:

And the good man said, "There is hardly anyone who knows you better than I do."
Publicado por Joel R en 15:18:00 No hay comentarios:

In a Summer afternoon I spread into the horizon, able to caress the shores where people gather to sip on dreams of infinity. Breath infused waves with the beat of my heart, going to and fro in an eternal dance with the attentive Moon. Fish, monsters, reefs, whales and every single particle swarmed with life lay dormant in the wait of the explosion of percussion and brass. With the wind as accomplice I used each of the clouds as bows to play on strings of blue skies what a Frenchman composed to serve as a companion for the sound of the ocean. On the 23rd day of the infinite month I shrouded my world with the joy of a sea that as vast as it is could fit in my soul. There was nothing to fear inasmuch as time lost itself in the eyes that reflect the shine of the stars. There was nothing to doubt because of the might which drifted madness and sanity into a crack in the floor of the sea until each note had faded. For twenty-three minutes those three sketches brought into existence by a virtuoso man drove me abstracted and lonely, omnipresent and embraced, complete and asunder. For those twenty-three minutes I could finally sense I am green and humid.

'An empty seat to the left and one to the right regarding wherever she might have wished to have sat...'
Publicado por Joel R en 14:49:00 No hay comentarios:

The vermilion rise of words on this hot day leads me to believe in the non-stop creation one pursuing a literative objective indulges in. What is it but the world and its beauty, horrour, pleasure, vicissitudes, minutiae and blockades what one attempts to portrait in that which sometimes pops up as faulty, indefinite, precise or concise images? Whether it will be as utterances, lines, notes, paintings, photographs or propositions, the tick which encourages one to act lies deep in the person who has chosen to listen...
Publicado por Joel R en 17:21:00 1 comentario:

...couple of misregarded organs which do usually feed up this blog you have tried to reach are already in a somewhat malfunction...Hence the unappearance of words.
Publicado por Joel R en 17:02:00 No hay comentarios:

Headache...
Tongues of mute spitting, lighting up euripidean one-eyed pictures on the wall...
Headaching the table with her very hands...
Whereupon rain I cry, pry, my...
Gunja of eternal gratitude...
Blue squares...
Bleu squares...
Squaring bluexity...
About nothing I am. Salt-cellaring thy notes of rye.
Publicado por Joel R en 10:26:00 No hay comentarios: 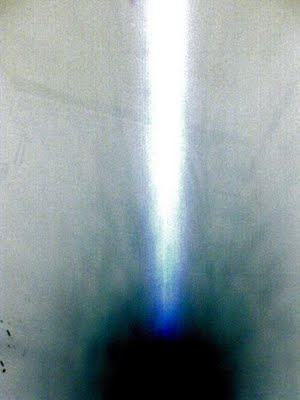 There is no thought I cannot arise...
Publicado por Joel R en 9:37:00 No hay comentarios:

Such a rare experience. All the elements captured by my vision blur into a mass of edgeless colours fusing with each other. The voices which surround me appear as distant echoes of ideas I might have never grasped since I cannot hear them. Time is neither absolute nor relative, so is space. I can only tell at that very precise moment how the Universe bends. I bend as well, you understand... There is no thought of no one or nothing. If I wished so, I could reach out and grab any star I wanted, for all matter condenses in one infinite speck, awaiting for the precise line of notes which arises a big bang. The tune explodes. So do I. One can become a countless amount of quarks, gluons and neutrinoes travelling through time and space without any possible obstacle. Atoms on the run. There is no place in the Cosmos one cannot arrive at. Swirling around in beams of light fast, bouncing commanded by the tempo of a song. Then the gradual vanishing of the piece...A journey that may only last five minutes and 9 seconds, yet there ain't nothing like it.
It is quite hard to catch one's breath once more. The sense of touch could remain numb for the rest of the day. You cannot clearly comprehend what is going on around, and very few voices can cross the membrane which shrouds this mind which will not ever be the same.
I walk on a familiar street [Familiar I dare say since ocurrance does not repeat itself due to the distorted perception the astral trip has left] I ain't lost, but I ain't there either. Keep walking till one gets to where one ought to be.

"I'll eat the Universe.
It won't remain miniscule in me.
It shall unfold, expand.
It will rip me from the inside, it will reach its vastety.
But then, I'll be one with it.
I'll be the Universe."
Publicado por Joel R en 9:33:00 No hay comentarios: